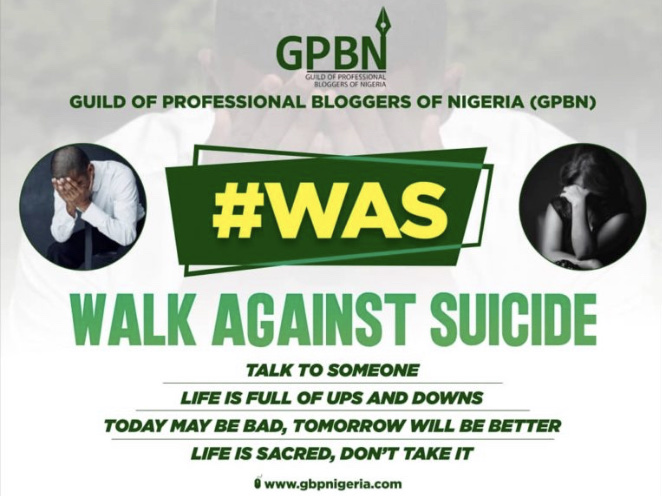 Lagos State Mediation Centre , an agency under the Lagos State Ministry of Justice is embarking on a walk tagged #WAS (WALK AGAINST SUICIDE) in an attempt to bring attention to the growing number of suicides across the country.

This was disclosed by the President of the Association, Mr Chris Kehinde Nwandu (CKN) during a press conference held in Lagos during the week

According to the Association ,the prevailing socio-economic situation in Nigeria over the years has brought some level of frustration to the people .This could be as a result of the collapse of the communal extended family structures which Nigerians have been noted for over the decades as well as the dwindling economic situation in the country.

Instances of abuses, poverty, relationships gone soar and academic frustration have also been identified as some of the factors leading to suicides in recent times.

The Association is of the opinion that religious leaders as well as those in government circles have shied away from their responsibilities to the people in this regard.

Some of the victims believed they had no other option than to terminate their lives.

The Guild of Professional Bloggers of Nigeria (GPBN) advocates that immediate attention should be drawn towards this increasing scourge.

• Bring attention of Government to the rising cases of Suicides

• Create awareness that Suicide is not the best option to any problem.

• Give hopes to those in need

• Bring back the communal life for which Nigerians are not for.

• Create an avenue for counseling for those under severe depression

Tags:action aid, GPBN, Say no to Suicide, wall against suicide