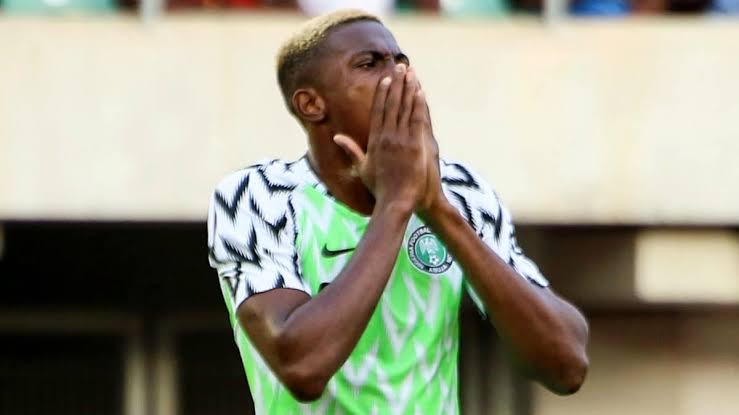 Today, we will be sharing with a summarized documentation on the biography of the young player victor osimhen.

Victor osimhen is a Nigerian professional football player who currently plays as a striker for the Nigeria’s National team known as The Super  Eagles.

The young player, victor osimhen was born as Victor James Osimhen on December 29,1998,in Lagos, Nigeria.

Victor osimhen is last child of six children and he was raised by his Father Patrick Osimhen alongside with his five other siblings. Growing up as a child wasn’t really easy for him because he came from a very poor background, that’s why he had to hawk things on the street of Lagos just to support his humble parents.

Victor got inspired to play football when always watch his Elder brother play football then as a child, so how  started playing football with his neighborhood team as a forward player. Later on, he joined the ultimate strikers academy based in Nigeria where he played for a couple of years for the team until 2017.

In January 2017 ,he signed a three-year contract with the VFL Wolfsburg with the transfer fee of $3970225. Osimhen later made his Bundeshga debut as a substitute against Borussia Monchengladbach and so far he has played 11 matches since 2017 and his contract with the team will keep him until June 30,2020.

Victor Osimhen also plays at the international stage, in October 2015, he made his international debut with the Nigeria U-17 under his coach Emmanuel Amunike where he scored two goals in his debut and it was his awesome performances that helped win over millions of heart and fans and has scored a total goals of 10 in his 7 games for the U-17 team. Victor osimhen also played 3 matches for Nigerian U-23 under the coach Samson Siasia. On June 10,2017,he made his international debut under the coach Gernot Rohr.

The young footballer is estimated to worth up to $2 million as his networth and he earns a salary of $900,000 annually from his club. Osimhen also earn from his endrosment deal with companies like Nike by promoting their products.

From the onset of his career so far, victor osimhen was won numerous awards such as;

• Along with his team, he was honored with FIFA U-17 Worldcup, Goldenboot, Silver ball and CAF youth player of the year in 2015

• He, along with other players like Jamiu Alimi ,Noah Baze and Alhassan were all called up to the Nigeria squad within the last twelve months.

Other facts about Victor Osimhen

• Aside from his football career,he is also passionate about rap music and his favourite artist is olamide.

• Aparr from being a famous Nigerian footballer, he is also quite popular on social media too with over 52k followers on instagram.

• He once had a girlfriend Blessings osimhen whom he dated for 2 years from the age of 16 before they broke up in 2018, thereby making him currently single and having enough time to focus on his professional career.