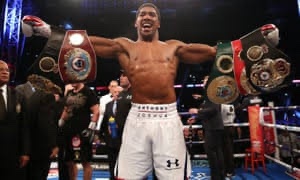 Anthony Oluwafemi Olaseni Joshua was born on 15th October 1989 to Yeta and Robert Joshua in Watford. His mother Yeta is a Nigerian while his father was of Nigerian Irish origin.

Anthony Joshua spent his early life in Nigeria where he attended Mayflower Boarding school in Ikenne. After his parents divorced Anthony Joshua relocated to UK. He was called Femi while growing up by his friends and Teachers.

While in the UK, Anthony Joshua attended Kings Langley Secondary School. While in school Anthony Joshua excelled in sports and Athletics. He broke the schools nine years record on 100m at a time frame of 11.6 seconds.

Anthony Joshua started boxing at the age of 18 following his friends suggestion. Anthony Joshua won the Haringay Box cup in 2009 and 2010. In 2010, he won the ABA championship. Anthony Joshua turned down £50,000 offer to become a professional boxer. Later in 2010, Joshua became the British Amateur Boxing Champion after he joined GB Boxing team.

In 2011, he beat Eric Berechlin and Cathal McMonagle but was stopped by aggressive Romanian southpaw Mihai Nistor st the 2011 European Amateur Boxing Championship. In October 2011 the Boxing Writers Club of Great Britain named Joshua Amateur Boxer of the Year.

Joshua made a sudden arrival at the world scene after he defeated Roberto Cammarelle, an Italian reigning World and Olympic champion and Eric Pfiefer of Germany before loosing to Magomedrasul Majidov.

In 2012, Joshua made his debut at the London Olympics. Joshua won the gold medal after beating Roberto Cammarelle via count back.

In May 1, 2019 it was confirmed that Anthony Joshua will fight against Ruiz Jr. at the Madison Square Garden New York. Ruiz Jr beat Anthony Joshua to become the World Heavy Weight Champion.

However a rematch was scheduled at Saudi Arabia on 7 December 2019. Joshua beat Ruiz Jr, unanimously on point