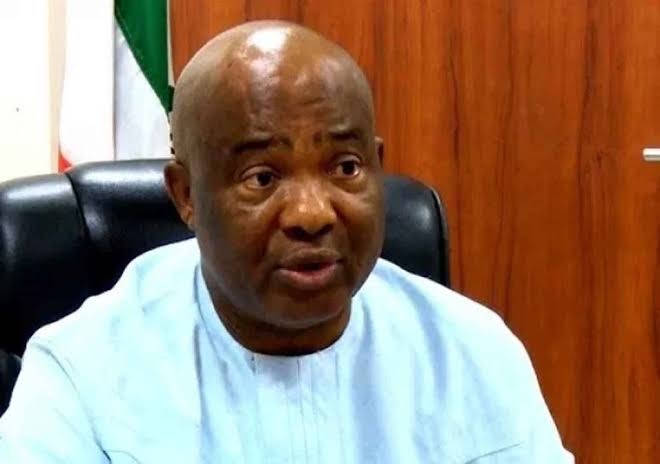 Hope Uzodimma was born in 1959. He is a Nigerian politician and the governor of Imo State and a former senator for the Imo West Senatorial zone. Uzodimma became governor following Supreme Court ruling in January 2020 that nullified the 2019 gubernatorial election that had Emeka Ihedioha of the Peoples Democratic Party (PDP) winner.

In 1982, Hope Uzodimma obtained his Senior Secondary School Certificate from Mgbidi Secondary School. Hope Uzodimma holds a Bachelor’s Degree in International Studies and an Advanced Diploma in Transport Studies. He has an Honorary Doctorate degree from Imo State University  and a Fellow of the College of Agriculture, Umuagwo.

In 2006, Uzodimma picked the nomination form to run for Governor but Ikedi Ohakim emerged victorious and subsequently won the 2007 gubernatorial election.

In 2011, Hope Uzodimma won the People’s Democratic Party (PDP) primary to run to represent Imo west senatorial zone. In February 2011, a federal high court declared the incumbent senator Osita Izuanaso the winner of the PDP primaries on the basis that Uzodimma had not been cleared by the PDP’s electoral panel headed by Orji Nwafor-Orizu.

Uzodimma challenges the he ruling of the Federal High Court and continued his campaign to be elected as a senator. The Appeal court upheld the February ruling at the tribunal. Uzodimma challenged the ruling at the Supreme Court. In April 2011, Uzodimma emerged the winner with 85,042 votes, ahead of former Imo Governor Achike Adenwa of the Action Congress of Nigeria (ACN) with 64,228 votes and Rajis Okpalan Benedicta of the All Progressives Grand Alliance with 57,110 votes.

In May 2011, Supreme Court upheld Uzodimma as the rightful candidate of the People’s Democratic Party (PDP).

In 2015, Uzodimma was re-elected for the same position. While in the Senate, Uzodimma was the vice Chairman Senate Committee on Aviation.

Hope Uzodimma picked the nomination form to run for Imo State Governor under the platform of the All Progressive Congress (APC). In October 2018, Uzodimma defeated Governor Rochas Okorocha’s son-in-law, Uche Nwosu among other contenders. Uzodimma however lost to Emeka Ihedioha of the Peoples Democratic Party (PDP).

In January, 2020, the Supreme Court declared Uzodimma winner of the 2019 gubernatorial election despite coming fourth in the poll.

On 14 January, 2020 the Supreme Court nullified the election of Emeka Ihedioha of the Peoples Democratic Party (PDP) as governor of Imo state and declared Hope Uzodimma of the All Progressive Congress (APC) winner of the 2019 gubernatorial election.

In the unanimous judgment of the seven-member panel, read by Justice Kudirat Kekere-Ekun, the apex court agreed that results in 388 polling units were unlawfully excluded during the collation of the final governorship election result in Imo State.

According to the panel, if you sum up the results from the 388 polling units, Uzodimma won majority of the votes and thus is the winner of the 2019 gubernatorial election in Imo State.

“Vote due to the appellant Senator Hope Uzodinma and the APC from 388 Polling Units were wrongly excluded from scores ascribed to the appellant(to them),” the justices ruled.

“It is thereby ordered that the appellant votes from 388 Polling Units unlawfully excluded from the appellant vote declared shall be added and that the first respondent, Emeka Ihedioha, was not duly elected by a majority of lawful votes cast at the said election.”

“It is hereby declared that the first appellant (Mr Uzodinma) holds the majority of lawful votes cast at the governorship election held in Imo State on March 9, 2019.”

The justice said Mr Uzodinma has satisfied the mandatory constitutional requirements to be declared governor.