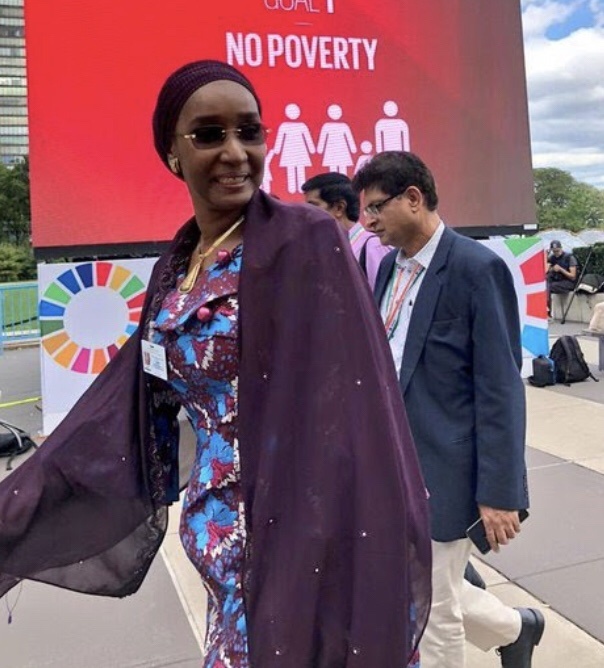 Sadiya Umar Farouk was born on 5th November,1974 in Zurmi LGA, Zamfara State. She is a Nigerian business administrator, politician and the Minister of Humanitarian Affairs, Disaster Management & Social Development. She is the youngest minister in President Mohammadu Buhari’s administration

She proceeded to Ahmadu Bello University Zaria where she obtained a degree in Business Administration in 1998.

In 2008, Sadiya Umar Farouk obtained a masters degree in International Affairs and Diplomacy from the Ahmadu Bello University Zaria.

In 2011, she obtained a masters degree in Business administration from the same university.

Sadiya Umar Farouk was the National Treasurer of the Congress for Progressive Change (CPC) from 2011 to 2013.

In October 2019, president Mohammadu Buhari was rumored to be planning a secret marriage with Sadiya Umar Farouk.

Online cards were designed inviting all to the wedding Fathia at the Aso Rock mosque.

However, the rumor ended up to be a lie as Sadiya Umar Farouk was reported to be outside the country for the 17th edition, Executive Committee of the High Commissioner”s Programme in Geneva.

On September 24th, 2020, Sadiya Umar Farouk got married to the Chief of Air Staff Sadique Abubakar. Their marriage was reported to be in a private ceremony.

Prior to her marriage, Sadiya Umar Farouk have never been married.