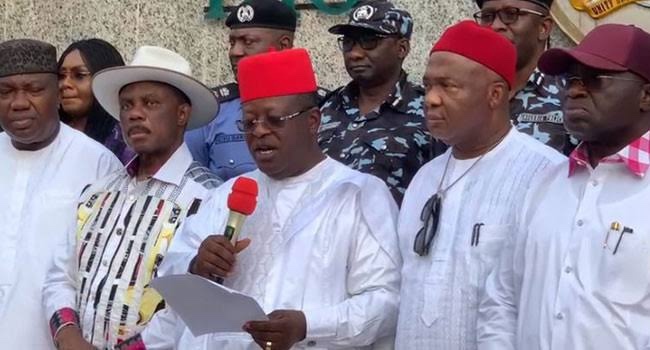 Igbo National Movement, INM, has urged the governors of the South East to rise up to their responsibility and provide security which is one of their core duties.

INM said the spate of insecurity in South East and the gruesome murder of Chike Akunyili is a “sign of leadership failure, and/or a tell-tale sign of state failure” and charged the governors to “show leadership and secure your people”.

“The recent spate of violence in the South-East region, notably in Anambra state over the past few days, is at the same time, a sign of leadership failure, and/or a tell-tale sign of state failure.

“The killing of Dr. Chike Akunyili along with close to a dozen others in just one day around Nkpor, Anambra state, spells more than any recent events, the height of insecurity in the South-East.

“If our elected government officials presiding over our people all over Ala’Igbo, are leaders in any true sense, this ‘Aka Enwe’ would never have evolved into the human hands on triggers threatening and killing innocent Igbo sons and daughters in their own homeland today.

“Given their state’s chief security officers, one will be spot-on to say that the South-East Governors are sleeping on duty. Certainly, if their states where their personal homes, they will do so much better to secure lives within it.

“Having agonisingly observed the insecurity in the South-East for so long, it has become apparent that the state’s chief security officers have slept on duty for so long.

“Tired and terribly distressed over the plight of our people, especially with regards to security, we are compelled to call on all our Governors in Ala’Igbo to rouse themselves from their continued careless slumber, and muster some credible courage in the face of this rising insecurity in Ala’Igbo.

“It is time to wake up and show leadership. Enough is enough!,” part of the statement reads.

INM further warned that “If decisive actions are not taken right away, a time will soon come, when Ndi’Igbo will no longer want to come home. This in turn, will worsen the economy of Ala’Igbo; first by crippling its hospitality industry, then the local tourism driven by the deep nostalgia that makes Igbos return home often. Ofcourse, when hospitality and tourism goes, transportation will follow. Already Igbos in diaspora are thinking twice about weddings in the South-East… gradually, like a vicious cycle, we will breed more poverty in the region, and more crimes will follow.

“Taa bu gboo! Odimma ndi Igbo is paramount. We must remind our elected officials that it is the duty of those elected by the people, to act in the interest of the people as long as they occupy the office they may be so elected into.”

They also called on “well-meaning Igbos, Igbo leaders, as well as all who owe Ndi’Igbo any duty as regards security of lives and properties in Igbo land; to immediately commit best efforts, towards ending this terror taking root on our streets and homes, from Onitsha to Aba, from Nsukka to Owerri, and from Abakaliki to Okigwe.”