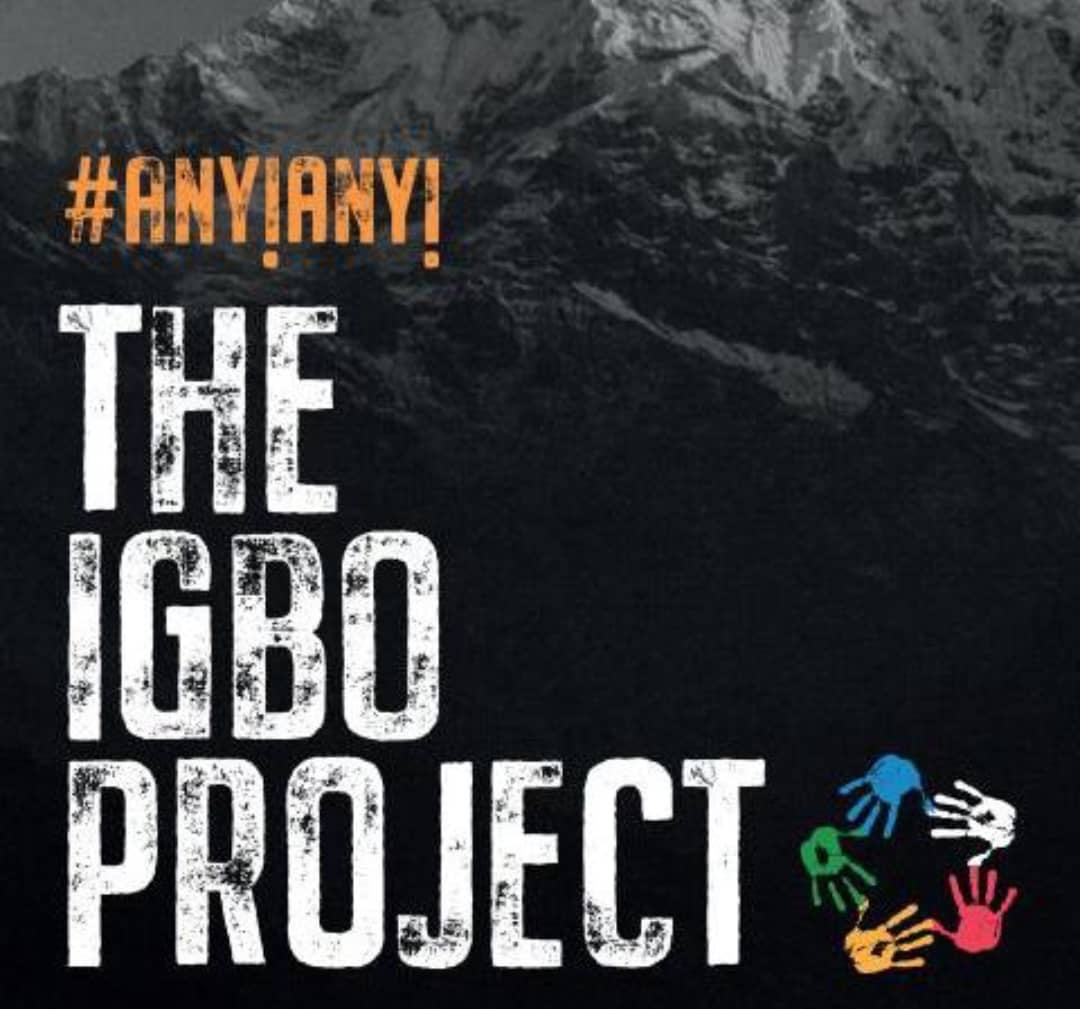 #AnyiAnyi, a group of highly resourceful Igbo professionals and experts gathered from across the globe, led by Anthony Olisa Okolo and Peter Agba Kalu have commissioned “The Igbo Project” which is a bold undertaking aimed at documenting every aspect of Igbo identity in the areas of culture, tradition, religion, social activities, enterprise, arts, family and technology.

As a global brand, #AnyiAnyi’s initiators decided to conduct this research, at this time, in view of the unrest in some areas of Igboland, and the general feeling of disillusionment that pervades Igboland today. The research aimed to condense all the cries of marginalization raised by the majority in Igboland, with the intention to distil what exactly the Igbos need from Nigeria today. The need to answer the Igbo question within the Nigerian context is essential to peace and stability in Nigeria, and therefore of importance within Africa and by extension, the international community.

In the research, over 20 issues ranging from the frustrations arising from economic inequalities to issues outstanding from the implementation of reconciliation policies after the Civil war. These issues were condensed into these main issues discussed hereunder:

1. A prominent School of Thought amongst the respondents were of the opinion that the Igbos are yet to enjoy a full assurance of reconciliation from the Federal Government of Nigeria. The people who hold this view are of the opinion that despite the “No Victor, No Vanquished” motto that led to then 3Rs policy of Reconciliation, Rehabilitation and Reconstruction, Igbos recall that they were abandoned to their fate, impoverished, and forced to suffer to rebuild from nothing while the rest of Nigeria profited from indigenization decrees while the Igbos were on their knees financially. The Federal Government were perceived to have abandoned the reconstruction of Igboland, deliberately avoiding the reconstruction of major commercial interests such as the Onitsha Main Market, which was utterly destroyed during the war, despite being a purely civilian structure. To buttress these points, the proponents of this view allude to the current poor state of Federal infrastructure in Igboland, when compared with other regions. The lack of new infrastructure to cater for the growing population of Igbos is another reason that seems to corroborate this view. As an instance, the premier University of Nigeria, is reported to remain a shadow of its former glory, while less historical institutions in other regions receive abundant Federal subvention, even while UNN’s academic credentials remain more impressive in the local and international stage than other Nigerian universities.

2. Followers of this School of Thought are also of the opinion that Nigeria also owes the Igbos apologies for pogroms and killings of its indigenous people in the prelude to the war, during the war, and subsequently, in all the years following the war, down into the present day. The fact that the largely peace-loving and patriotic Igbo is always a soft target for extremist forces to maim, kidnap and murder at various moments in the history of Nigeria, is too delicate a matter to overlook according to this group. Ndigbo insist that the Federal Government should own their wrongs in failing to protect the lives of its Igbo citizens, time and time again, and wish that they would be open to do the rightful restitutions for lives and property lost, running into the millions in human life, and billions in money. One of professionals interviewed about the nature of the restitution responded that reference can be made to the Igbo dossier which was submitted as a presentation to the Oputa Panel. The fact that this dossier was brushed aside, is a pointer to many Igbos of the contempt with which their grievances are viewed by the rest of the country.

3. The deprivations that Igbos are made to suffer daily, while conducting the commerce that ensures that Nigerian families have the best quality foods and goods in their households, is another issue that stirs Igbo hearts to anger. The multiple taxations, poor road infrastructure, denial of access to foreign exchange for legitimate trade, high shipping and clearing costs and finally, the lack of deep-sea ports in Igboland, all add to the frustrations across the Igbo citizenry. As the largest trade zone in the country runs from Onitsha to Aba, dredging the River Niger at Onitsha to the depth of a standard seaport is a most reasonable request according to Ndigbo. Historical records support this view. The core trade ports for in pre-independence Nigeria, ran from Akassa to Calabar and to Onitsha. The criminally irresponsible choice to deny Igboland the seaports that would make the most business-sense from a logistics perspective, with regard to shipping along the Atlantic Ocean routes, is only understandable when viewed from the prism that dictates that Igbos must be denied anything that makes life easy for them, or that allows them to prosper.

4. As a result of the above, a majority of the survey contributors demanded that Ndigbo should seek autonomy from the Federal Republic of Nigeria. This means devolution of power so the Igbos can pursue economic development on their own terms. This autonomy demanded in a devolved government seems to closely resemble the example of the United Kingdom and its relationship with devolved the governments in Wales, Scotland and Northern Ireland, with each of these governments having responsibilities to make their own legislation in policy areas such as:

j. Sport and the Arts; and

Proponents of this school who were more acceptable of overall sovereignty remaining with the Nigerian Federation were keen to point out that Igboland would still remain a part of a Commonwealth of Nigerian States, or a more perfect union based on a Federated structure that allows other states to assert their autonomy, which agreeing to reserve matters relating to macroeconomic issues, currency, defence, debt-repayment, immigration and financial services to remain with the re-constituted Federal Government.

5. The more radical elements of hard-core Igbo nationals insist that Ndigbo want to be seen as Igbo alone in a homogenous area, and not to be seen as the old South-East region. This group is relying on the potential for a unification of all Igbo communities carved into other states by the previous Military Governments, without any democratic processes, into one homogenous Igbo nation.

6. One of the most interesting parts of the Anyi Anyi-Igbo Project Research that is sure to spark a lot of debate across quarters, is the request for Port-Harcourt to revert to regain its Igbo idemtity, and retrace its original status as a part of Igboland which was previously known as “Igwe Ocha”. Those who hold this view insist that it was only after Gowon and the Nigerian Army took back Port Harcourt, that it was made into a non-Igbo territory at the end of the war. One of the elder respondents interviewed stated as an instance that Obigbo (which is clearly named in the Igbo language) cannot be a non-Igbo territory barely by understanding the name and history of the place, adding, that it was President Shehu Shagari who authorized the carve out of Obigbo to Rivers State, as part of a grander strategy to reduce Igbo territory in the Second Republic. Although very controversial, this finding remains a major discussion point for these respondents. It is impossible to tell if this is a majority view held by Ndigbo, and that will require more detailed research and analysis.

7. Among the younger generation of Igbo traders, the majority interviewed were of the opinion that Ndigbo need federal presence that will enhance commerce. This could be done by upgrading Imo State and Anambra airports to International Cargo Airports, while building at least one deep Seaport to signal a change in relations between Ndigbo and the Nigerian Federation. The construction of a railway line from Port Harcourt through Aba, to Owerri, Onitsha and then to Lagos would need to be additional to this demand as it would improve the internal arteries of trade that are essential to making Nigeria increase productivity and wealth.

8. As for calls to decentralize electricity to allow independent power generating companies to spring up in Igbo nation as well as the re-opening of Coal power generation through mining of reserves in Enugu, the respondents did note that positive efforts by the company – Geometric Power in Aba to start distribution of electricity should be encouraged and supported by the government of the day.

9. From all the responses received from over 60,000 Igbos surveyed, it would seem the Igbos need to feel a sense of belonging if they are to return to full re-integration to the Nigerian enterprise. To achieve this, Igbos need the rest of Nigeria to support it to aspire to any political office it may desire in Nigeria. This same school of thought believes that it says a lot about how the rest of Nigeria look at Ndigbo, when it is not even possible to consider them for leadership even after concessions made to support the emergence of Obasanjo, Yar’adua, Jonathan and Buhari respectively from the South-West, North,West, South-South and North-East, mean that it is only the South-East which is yet to taste the premier political position in the land, over the last 50 years. Denying that the Igbo has a legitimate reason to expect the support of the rest of the country, for one of their own to attain the position of President, after 50 years in the doldrums, supports the view that the rest of Nigeria are opposed to a Nigerian president of Igbo extraction at any cost. This does not bode well for equity, fairness and the notion of equality in Nigeria.

10. Similar to this is the demand that lgbos need at least one more state created to them to ensure that they are not inequitably unbalanced when it comes to political appointments and national representation. This is presently the case in Nigeria. If given one state only, it may still not amount to equity as the North-West has seven states, but that in itself would be a start.

Interestingly, the majority of those whose opinions were sampled believe that the way the current band of Igbo leaders are going about the actualization of these demands is totally wrong. The Governors and political representatives at state, national and civil society level have been accused of very poor conceptualization, poor strategy, and poor delivery. While the Igbos are lamenting injustice, lack of federal presence and more, it is agreed that the common Igbo citizen would have expected the current Igbo leaders to do more.

Most of the respondents agreed that agitators for freedom should first focus their demands on the South-East States by demanding a better performance, accountability, and a clear vision from Governors in Igbo land. To press home this demand, there were clear signs that Ndigbo have indeed begun the journey to unify themselves under one voice to ensure credible leaders represent the Igbo interest at all levels. To achieve this, the groups mentioned have placed a renewed emphasis on the teaching of the Igbo language to the new generation, kick-starting a revival in Igbo culture, tradition, and ancient political institutions. This has in-turn led to a renewal of Igbo national pride and the stirrings of a dogged determination to identify, nurture, and support credible leadership that will help Igbos get what they want.