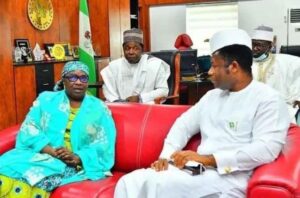 A foremost presidential aspirant on the platform of All Progressives Congress APC, Tien Jack Rich has visited Kaduna State where he condoled with the government and people of the state following the terrorist attack on Abuja-Kaduna bound train in which some persons died while others sustained various degrees of injury.

He also made a presentation of N15m cash during the visit to families of the victims and support in the treatment of the injured ones.

Tien Jack Rich, the President and Founder Belema Oil who was received by the Deputy governor of Kaduna State, Dr. Hadiza Sabuwa Balarabe expressed sadness over the incident and prayed God to console the families who lost their loved ones.

Read Also: Why I don’t have a girlfriend” – Nollywood actor, Zubby Michael speaks

Nasir el-Rufai Movement, a support group of the state Governor, Nasir el-Rufai announced Jack Rich’s visit in a social media post on Friday 1April, 2022. They also thanked the presidential hopeful and his delegation for identifying with the government and people of the state and the country at large at these trying periods.

The post reads, “Her Excellency Dr. Hadiza Sabuwa Balarabe today received a delegation on a condolence visit led by Tien Jack Rich, the President of Belemaoil and a presidential aspirant.

Jack Rich, who said he is in Kaduna to express his heartfelt condolences over the recent security challenges, said he believes in a corporate Nigeria and has come to express his solidarity with the government and people of Kaduna State.

Read Also: It is okay to celebrate everyone that’s winning – Timaya to colleagues

Jack Tien also donated the sum of 15 million naira to support the families of the victims and for the treatment of those injured.”

Jack Rich, an outstanding philanthropist is known for his undying love for the country and support to individuals, groups, and organizations in an effort to touch lives for good.