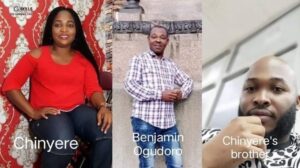 A Nigerian woman based in the United Kingdom, Chinyere Magella Ogudoro and her younger brother have been allegedly burnt alive by the former’s husband, Benjamin Ogudoro, GRASSROOT REPORTERS reports.

According to a post by a source who preferred anonymity and posted by a Facebook user, Chinenye Azubuike, the sad incident happened on Thursday, March 31st at their residence in Lagos.

GRASSROOT REPORTERS gathered that Chinyere, a mother of four, holds a masters degree from a UK university.

The post read: “This is my sister-in-law who relocated to Scotland less than 4years ago. She returned to Lagos yesterday by 8am. Her younger brother picked her up from the airport and drove her to the house.

“Her husband, Benjamin, from Ngor Okpalla LGA in Imo State, returned and incinerated the mother-of-four and the brother around 3am. The suspect told his sister to inform the family that the house caught fire and he escaped. Before Chinyere’s brother passed on, he explained all that transpired.

“Chinyere and her brother have been taken to the morgue while the suspect has gone into hiding. Prior to this incident, he had a quarrel with the deceased over a property she bought. He had wanted to sell the house but to his surprise, his name wasn’t on the documents. This angered him and he sent her death threats.

“He once fought with Chinyere with a machete which led them to separate for some years before they reconciled only for him to carry out his death threats. Please share this story cause it’s painful what has happened to her. Chinyere left behind her kids in Scotland.. it’s painful we have to bury the Ada and Opara of our family.”