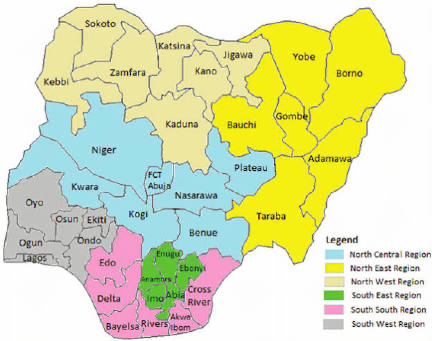 The northeastern part of Nigeria is dominated by the following tribes: Fulani, Fulfulde, Babur, Kanuri, among others. The North East is made up of Adamawa, Bauchi, Borno, Gombe, Taraba and Yobe

The notable languages in the north-central are Mangu, Birom, Nupe, Igala, Ebira, Tiv, Yoruba, among others. They often times referred to as the middle belt

North West is predominantly dominated by the Hausa Fulani, Baju, Jaba, among a host of other tribes. The North Western states are Jigawa, Kaduna, Kano, Katsina, Kebbi, Sokoto and Zamfara

South Eastern Nigeria is home to the Igbos, South East comprises of about 5 states among the 36 states in Nigeria. The South Eastern states are Enugu, Anambra, Imo, Ebonyi and Abia.
South South

The South South is the most oil rich geopolitical zone in Nigeria. It is dominated by the the Efik, Ibibio, Ijaw, Itsekiri tribes, among others. The South South States are Akwa Ibom, Cross River, Bayelsa, Rivers, Delta and Edo

South West is a geopolitical zone in Nigeria where the Yoruba tribe is predominant. It is made up of the following states, Ekiti, Lagos, Ogun, Ondo, Osun and Oyo