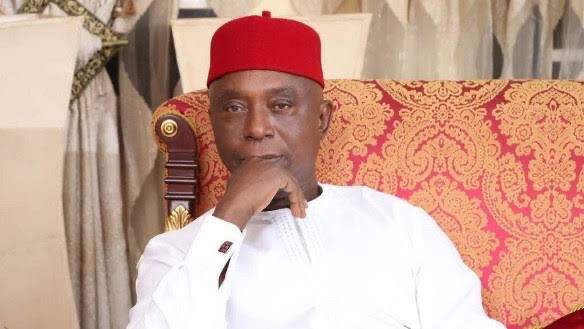 Ned Chinedu Munir Nwoko was born on 21 December 1960 into the Royal Palace of Idumuje-Ugboko in Aniocha Local Government Area of Delta state.

Ned Nwoko attended his primary and secondary education in the South Southern part of Nigeria where he obtained his first school leaving and WAEC.

Ned Nwoko proceeded to University of Keele, Staffordshire where obtained a degree in law and then to Kings College London where he obtained a masters degree in Law. Ned Nwoko bagged an honorary doctorate degree from Commonwealth University College, Belize.

Ned Nwoko is a Lawyer, businessman and politician. He represented Aniocha North-South, Oshimiri North-South in the Fedral House of Representatives from 1999 to 2003. He is also one of the major pillars of the Peoples Democratic Party(PDP) in Delta state. He served as a chairman External Committee of the Vision 2010 committee.

Ned Nwoko set up and maintain one of the leading law firms in the United Kingdom engaged in management and verification of foreign debts of third world countries, including their component states where he claimed to have practiced as a solicitor. He is a member of the capital market.

Ned Nwoko is married to six wives one of which included 18 years old actress Regina Daniels. Ned Nwoko was reported to have married Regina Daniels in a private wedding where only family and few friends were invited.

On June 29, 2020, Regina Daniels’ younger brother announced via his Instagram handle that she and her husband Ned Nwoko has welcomed a baby boy.

”OFFICIALLY AN UNCLE YOU KNOW?Congratulations my diamond
It’s a bouncing baby boy

Regina Daniels’ baby was born barely two days after she was thrown a surprised baby shower by her husband, friends and families

Ned Nwoko is one of the richest men in Nigeria valued at $1.2billion.