Senator Obarisi Ovie Omo-Agege is a Nigerian lawyer and politician. He is senator representing the Delta State central senatorial district at the Nigerian 9th senate .

Omo-Agege is from Orogun in Ughelli North local Government of Delta State. He emerged the Deputy President of the Nigerian Senate of the 9th National Assembly on June 11, 2019 after he defeated his rival, Ike Ekweremadu with a margin of 31 votes to win the second leadership position of the National Assembly.

Omo-Agege is the first Senator from Delta State to emerge as Deputy Senate President, and also the first Delta Central Senator to be re-elected. 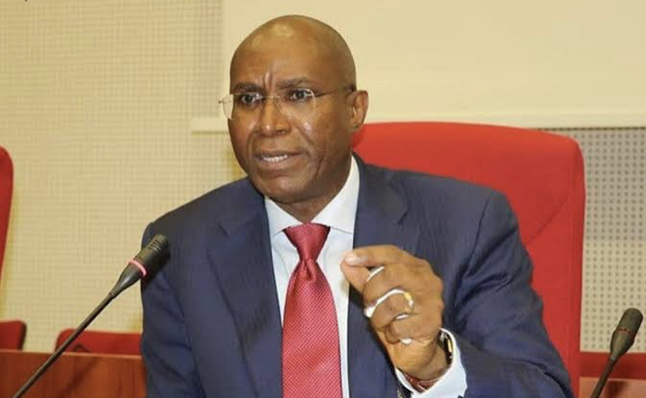 Omo-Agege graduated in 1985 from the

University of Benin with a degree in Law. He was called to the Nigerian bar in 1986.

In 2002, he obtained his master degree in law from Tulane University Law School .

Omo-Agege was deployed to Kwara State for his National Youth Service Corps (NYSC). He completed his NYSC with the Directorate of Criminal investigation and intelligence, Nigerian Police Force, Kwara State Command. Omo-Agege started his career in law by working with PAT OKUPA & Co in Lagos in 1987.

Omo-Agege was called to the state bar of California, United State District Court and the United States Supreme Court, Washington, DC. Omo-Agege returned to Nigeria in 1992 to establish Omo-Agege & Associates where he was also Senior Partner. In 1996, he merged his firm Omo-Agege & associates in a partnership resulting in the name Agege & Esin.

Omo-Agege started out in politics by contesting for the ticket to be a representative at the Delta State House of Representatives under the platform of the Peoples Democratic Party , a ticket he lost in the party primaries. In 2003, former governor of Delta State, James Ibori , appointed Omo-Agege as an executive assistant, a position he held for two years.

He was later appointed as a commissioner for special duties by the governor.

Omo-Agege ran for the office of the Governor of Delta State but lost out at the People Democratic Party’s primaries to Governor Emmanuel Uduaghan .

Omo-Agege was appointed as the Secretary to State government (SSG) of Delta State by Governor James Ibori in 2007.

Omo-Agege ran for Senate in 2015 under the platform of the Labour Party (Nigeria). He was elected as a senator representing Delta central senatorial district on March 28, 2015.

Omo-Agege defected from the Labour Party to the All Progressive Congress (APC) on March 7, 2017. Ovie Omo-Agege is the Senator-elect representing Delta Central in 2019 general election. On June 11, 2019, he emerged as the new Deputy Senate President of the 9th National Assembly with 68 votes cast to beat Senator Ike Ekweremadu with 37 votes.

Omo-Agege is married and he has five children.