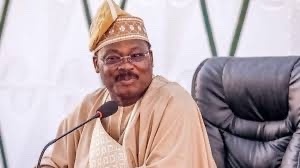 Isiaka Abiola Ajimobi was born on 16th December,1949 in Oja-Iba, Ibadan, Oyo State, South Western region of Nigeria. His father was Honourable member of the House of Assembly in the Old Western region while his uncle Hon. N.A. Ajimobi was minister of works and transport in the Western Region. Ajimobi was the former Governor of Oyo State and Managing Director/Chief Executive Officer of the National Oil and Chemical Marketing Company.

Ajimobi obtained a degree in business administration and Finance from State University of New York, in Buffalo, New York.

He obtained an MBA in Operations Research and Marketing with a concentration in Finance at Governors State University, University Park, Illinois

Ajimobi worked as the Managing Director/Chief Executive Officer of the National Oil and Chemical Marketing Company a subsidiary of Shell Petroleum, Nigeria till 2002.

In 2003, Ajimobi was elected as a Senator representing Oyo South Senatorial zone under the platform of Alliance for Democracy (AD).

In 2006, he picked up nomination form to run for Oyo state Governor under the All Nigerian Peoples Party ( ANPP). He however lost in the 2007 gubernatorial elections.

In 2011, Ajimobi recontested for Oyo State Governor under the platform of Action Congress of Nigeria (ACN). He was sworn into office on May 29, 2011.

In 2015, Ajimobi ran for a second term in office under the platform of All Progressive Congress (APC). He defeated his two predecessors Christopher Alao Akala and Rashidi Adewolu Ladoja making him the first Oyo State Governor to occupy the seat for two term.

In 2018, Ajimobi picked a nomination form to run for Senate under the platform of the All Progressive Congress (APC). He won the APC primaries but lost to Kola Balogun of the Peoples Democratic Party (PDP) in the 2019 General Election.