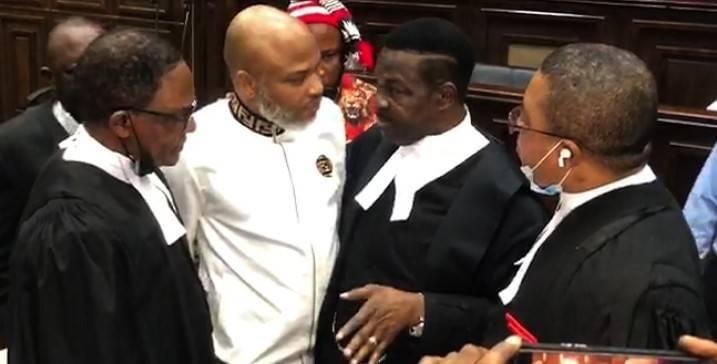 The Federal High Court sitting in Abuja, on Wednesday, declined to grant bail to the detained leader of the Indigenous People of Biafra, IPOB, Nnamdi Kanu, pending the determination of the treasonable felony charge the Federal Government preferred against him.

Trial Justice Binta Nyako held that Kanu must explain the reason why he breached the previous bail that was given to him, before he could enjoy another favourable discretion from the court.

A member of Kanu’s legal team, who craved anonymity, told NEWSMEN on Wednesday that FG had in the amended charge, listed some lawyers representing the embattled IPOB leader, including Mr. Ifeanyi Ejiofor and Mr. Maxwell Opara, as accomplices of the defendant.

FG, it was gathered, alleged that the said lawyers, were constantly in contact with Kanu, after he jumped bail and fled the country.

It will be recalled that Kanu was subsequently re-arrested and returned back to the country from Kenya, in controversial circumstance.

Trial Justice Binta Nyako had on April 8, struck out eight out of the 15-count treasonable felony charge FG preferred against Kanu.