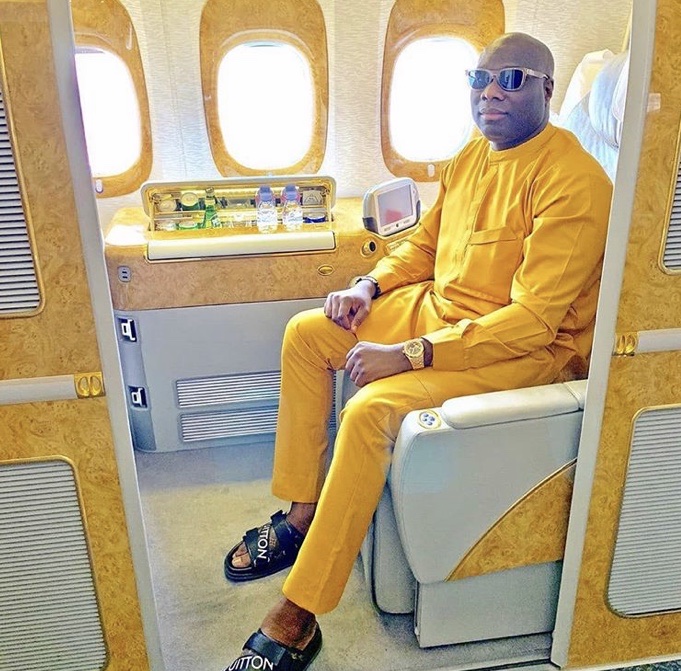 Ismail Mustapha popularly known as Mompha was born on June 16, 1979. Mompha is popularly for his luxurious lifestyle on social media, He has high tastes and often times flaunts cash on social media. He is the Chief Executive Officer of Mompha Bureau De Change located at Bankole Street, Balogun Lagos Island.

Mompha is friends with notable Nigerian celebrities and politicians including Tiwa Savage, Patoranking, Nasir el-Rufai and so many others.

Not much is known about the educational background of Mompha. He attended Government College Ikorodu, Lagos state.

Mompha flies only in private jets and first class tickets. Mompha is said to worth millions of dollars.

Mompha is married to a Muslim woman and has two children, a son and a daughter.

Mompha and Hushpupi were said to be good friends till they had a fallout. During the fallout both of them bashed each other on social media. Mompha said Hushpupi’s dad is a taxi driver while his mother is a bread seller. He accused Hushpupi of always borrowing money from him and coming to his house with girls in Dubai because he could not afford rent.

#BREAKING 🇳🇬 Nigerian Bureau De Change King @mompha #Skyman reportedly ARRESTED in Abuja by the International Police @interpol_hq I have left several messages. Pls have patience. I’m an investigative Journalist. Arrest was 3 days ago the same time he posted last a picture of his Lil girl. Interpol should release a statement soon on WHY he was arrested and exact whereabouts and whose custody he’s in. The @officialefcc said they will get back to me too. Only good Journalists know about these secret arrests.😲💰💰They must be transparent though #humanrights #civilrights
DETAILS LATER… #KemiOlunloyo

On November 25th, 2019, Mompha was arraigned alongside his company, Ismalob Global Investments Limited by the Economic and Financials Crimes Commission (EFCC) for alleged N32 billion fraud, money laundering and running a foreign exchange business without the authorisation of the Central Bank of Nigeria at the Federal High Court, Lagos.

Mompha pleaded not guilty to the charges but was remanded in prison pending when his bail application is heard by the presiding judge Justice Mohammed Liman.

Mompha was on Friday 29 November 2019 granted N100million bail by the presiding judge Justice Liman. Mompha was also instructed to deposit his passport with the Deputy Chief Registration of the Court. He was further instructed to report at the Economic and Financials Crimes Commission (EFCC) office every forth night to show he has not left the country.