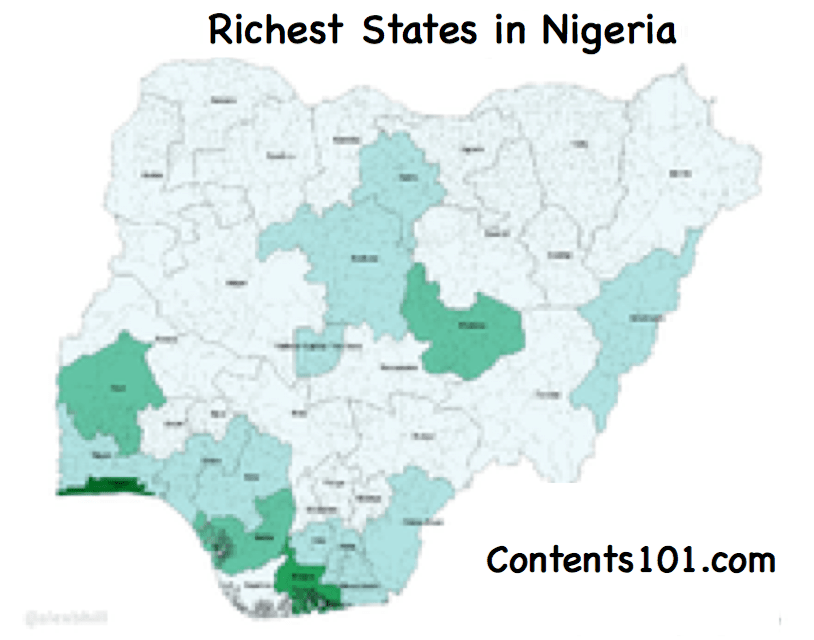 Nigeria is an independent country with 36 states that is blessed with natural resources. Most especially with oil but among these states there are some of them that are richer and blessed than the others not because these states are considered as the oil producing states but because they have a busy and high economic activity that generates revenue for such states .

Sometimes, these states could even survive and stand alone without the federal government allocations. Contents101 will be ranking the richest states in Nigeria based on Gross Domestic Profit (GDP).

Lagos State is the richest states in Nigeria. Lagos state is located at the south-western region of the state with a small land mass but happens to be the most populous state in the nation. Without being told, every Nigerian knows that Lagos is very large and busy city in Nigeria with a lot of activities going on over there. Lagos State is such as blessed state with so many businesses, industries, international and local facilities , institutions and many others. One of the most developed states in Nigeria with over millions of inhibants and population and happens to be the capital of Nigeria before it was moved to Abuja. So indeed Lagos State is richly blessed with wealth and resources. Lagos has a GDP of $33.68Billion.

Delta State is just like Rivers state is known for its oil and natural gas which has contributed economically to Nigeria’s sustainability. Aside these factors, Delta State is blessed with other mineral resources like rocks, limestone etc which are found in the state. Delta state has a GDP of $16.75billion.

This yourba speaking state is considered one of the richest states in Nigeria due to its great contribution in the Agricultural sector of the country. The state is known to have farmers who produce both local and international food stuff that are being exported to other countries for foreign exchange, so most of this state wealth comes from agriculture. Oyo has a GDP of $16.12billion

This state’s wealth mainly comes from tourism, the total revenue and profits generated from this sector alone is enough to take care of the state’s financial issues. Edo state has a GDP of $11.89billion

This state is  considered one of the richest states because it is an oil producing state and that’s their major source of wealth and resources. Akwa Ibom has a GDP of $11.18billion.

It may surprise you but Ogun State is among the richest states in Nigeria ,the internal generated revenue of this state per year is mostly from numerous manufacturing companies located in the state. Ogun state has a GDP of $10.47billion.

Kaduna state is located in the Northern part of Nigeria. Kaduna is the industrial center of Northern Nigeria. Kaduna manufactured products like textile, steel, aluminum, petroleum products and bearings. Kaduna has a GDP of $10.33billion