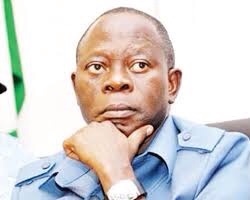 Adams Aliyu Eric Oshiomole was born on 4th April,1952 in Iyamho, near Auchi Edo State. He was the former president of the Nigerian Labour Congress (NLC), former governor of Edo State and National Chairman of the All Progressive Congress (APC). Oshiomole was born a Muslim but converted to Christianity after he met his late wife Clara.

Oshiomole worked at the Arewa textile company after his secondary school education. While at Arewa Textile Company, he was elected union secretary. In 1975, he has already become a full time trade union organizer.

In 1982, Oshiomole was appointed the general secretary of the National Union of Textile Garment and Tailoring Workers of Nigeria. A union that had over 75,000 employees.

In 1999, Adams Oshiomole became the President of the Nigerian Labour Congress (NLC). Whiles he was president of NLC, he led the campaign of industrial action against high oil prices in Nigeria. He also negotiated 25% minimum wage increase for public sector employees with former President Olusegun Obasanjo. Oshiomole was elected as the Textile Union Secretary while he was president of the Nigerian Labour Congress.

Oshiomole was a representative of the African workers in the on the Governing Body of the International Labour Organization (ILO). He served in the committee on Freedom of Association and a member of the Executive Board of the International Confederation of Free Trade Unions.

In April 2007, Oshiomole ran for the office of the Edo State governor under the platform of the Actions Congress (AC). Oshiomole lost to Oserheimen Osunbor of the Peoples Democratic Party (PDP). Oshiomole challenged the result in the Edo State Election Tribunal.

On 20 March 2008, the Edo State Election tribunal sacked Osunbor as governor of Edo State and declared Oshiomole winner of the 2007 election.

In November 2008, the Appeal Court upheld the ruling of the Edo State tribunal over voting irregularities in the election process.

In 2012, Oshiomole was elected for a second term in office with a massive landslide vote. In November 2016, he handed over to Godwin Obaseki

On November 2019,Oshiomole was suspended from APC after 18 local government chairmen from Edo State passed a vote of no confidence on him. The Local Government Chairmen accused Oshiomole of trying to disintegrate the party in Edo State. However, a faction of APC loyal to Oshiomole declared the suspension null and void and suspended the governor Godwin Obaseki.

In January 2020, the Edo APC reaffirmed the suspension of Oshiomole adding that he has no right to operate as the National Chairman of the All Progressive Congress (APC).

On 4th March, 2020, a High Court sitting in Abuja suspended Oshiomole as the National Chairman of APC. The court stated that Oshiomole having been suspended from the party, was no longer a member of the party and cannot discharge his official responsibilities as national chairman.

Oshiomole however filed for a stay of execution and appealed the ruling by the High Court at the Federal Court of Appeal.

In June 2020, the Federal Court of Appeal upheld the suspension of Oshiomole as the National Chairman of the All Progressive Congress (APC)

Oshiomole was married to Clara Oshiomole who died of cancer at the age of 54. In May 2015, Oshiomole married Lara Forte, an Ethiopian Air Hostess