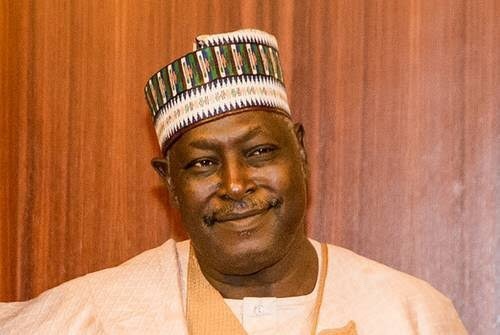 Engineer Babachir David Lawal was born on 2 October,1964 in Kwambla village, Hong Local Government Area of Adamawa State. He is an Engineer, Politician and former Secretary to the Government of the Federation (SGF) to President Buhari. Babachir Lawal was relieved of his duties in October2017 for alleged misappropriation of public fund.

Babachir Lawal obtained his First School Leaving Certificate from St. Patrick’s Primary School, Maiduguri in 1969. He proceeded for his secondary education at Military School Zaria in 1970.

In 2007, Lawal bagged a Bachelor of Arts (Christian Theology) at the ECWA Theological Seminar in Jos.

In 1986, Lawal moved to Data Science Nigeria Ltd where he attained the position of a regional Manager.

In 2002, Babachir Lawal joined active politics. He Joined All Nigerian Peoples Party (ANPP). He is a close ally of President Buhari.

He held series of position under ANPP

Ahead of the 2011 gubernatorial elections, He decamped to Congress for Progressive Change alongside president Buhari and held positions like

Following the emergence of President Buhari in the 2015 general election as the president, Babachir Lawal was appointed by President Buhari as the Secretary to the Government of the Federation (SGF) in August 2015.

Babachir Lawal was relieved of his duties following reports into his involvement in alleged diverting crisis relief funds. Boss Mustapha appointed as the acting SGF.

Babachir Lawal was accused of awarding N544.1million contract to himself and is being prosecuted by the Economic and Financials Crimes Commission (EFCC) for contract fraud.

Babachir Lawal is a member of the Nigeria Computer Society, the Nigeria Society of Engineers and the Council for the Regulation of Engineering in Nigeria.

Lawal is married with children.