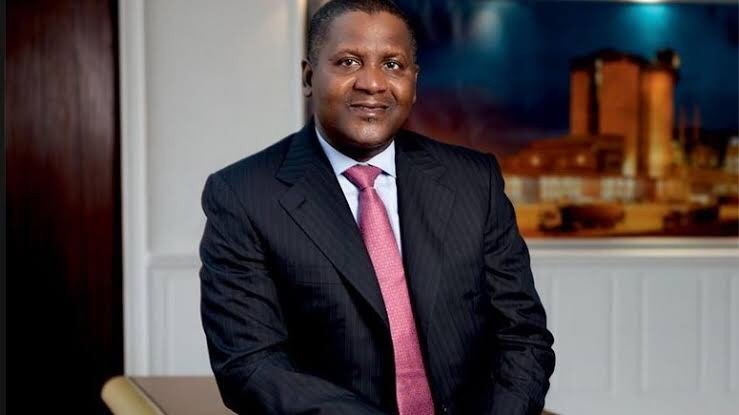 Aliko Dangote is a Nigerian businessman and the founder and chairman of Dangote Group, an industrial conglomerate in Africa. Dangote was born on the 10th of April 1957 to Mohammed Dangote and Mariya Sanusi Dantata. Dangote is an ethnic Hausa Muslim from Kano, Kano State. He is the great-grandson of Alhaji Alhassan Dantata who was the richest West African at the time of his death in 1955.

Dangote was educated at the Sheikh Ali Kumasi Madrasa, followed by Capital High School, Kano. In 1978, he graduated from the Government College, Birnin Kudu. He recevied a bachelor’s degree in business studies and administration from Al-Azhar University, Cairo.

The Dangote Group was established as a small trading firm in 1977, the same year Dangote relocated to Lagos to expand the company. However, today, it is a multi-trillion-naira conglomerate with many of its operations in Benin, Ghana, Nigeria, Zambia and Togo.

Dangote has expanded to cover food processing, cement manufacturing, and freight. The Dangote Group also dominates the sugar market in Nigeria and is a major supplier to the country’s soft drink companies, breweries, and confectioners.

The Dangote Group has moved from being a trading company to be the largest industrial group in Nigeria including Dangote Sugar Refinery, Dangote Cement, and Dangote Flour.

In Nigeria today, Dangote Group with its dominance in the sugar market and refinery business is the main supplier to the country’s soft drinks companies, breweries and confectioners. It is the largest refinery in Africa and the third largest in the world, producing 800,000 tonnes of sugar annually.

The company employs more than 11,000 people and is the largest industrial conglomerate in West Africa.

He also ventured into telecommunications and has started building 14,000 kilometres of fibre optic cables to supply the whole of Nigeria. Because of this, he was honoured in January 2009 as the leading provider of employment in the Nigerian construction industry.

Dangote sits on the board of the Corporate Council on Africa, and is a member of the steering committee of the United Nations Secretary-General’s Global Education First Initiative, the Clinton Global Initiative and the International Business Council of the World Economic Forum.

He was named Co-chair of the US-Africa Business Center, in September 2016, by the US Chamber of Commerce. In April 2017, he joined the Board of Directors of the Clinton Health Access Initiative.

A dedicated philanthropist, Dangote made an initial endowment of $1.25 billion to the Aliko Dangote Foundation in March 2014, enabling it to scale up its work in health, education and economic empowerment.

In addition, he is collaborating with the Bill and Melinda Gates Foundation to fight polio and other issues. He is also on the Board of One Campaign.

Dangote was previously married, and has three daughters including Halima Dangote, and one adopted son.

Dangote has an estimated net worth of US$8.1 billion as of January 2020, making him the 88th wealthiest person in the world and the richest person in Africa.