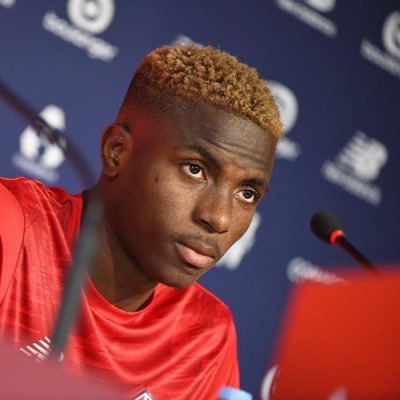 Victor Osimhen is a Nigerian professional footballer. Osimhen plays as a striker for both the Nigerian Super Eagles and French football club Napoli. Osimhen was born on 29 December 1998 in Lagos State Nigeria. Osimhen is from Esan South East Local Government Area of Edo State.

Victor Osimhen started his career as a footballer at the Ultimate Strikers Academy, Lagos where he was picked for the 2015 Under-17 World Cup in Chile.

Osimhen won the the Golden Boot and Silver Ball awards.

After an outstanding performance in the Under-17 World Cup where he scored 10 goals after making 7 appearances, German Professional football Club VfL Wolfsburg signed a pre contract with Osimhen.

In January 2017, Osimhen signed a three and a half years contract with Wolfsburg. Though Osimhen could not play immediately for the German club due to injury, he made his first debut on 13th May,2017 against Borussia Mönchengladbach.

In June 2017, Osimhen made his first debut as a Super Eagles player in a friendly match against Togo. He however missed out in the 2018 World Cup due to his inconsistent performance in Wolfsburg.

In January 2018, Osimhen played his first full 90 minutes game against Hannover. Osimhen underwent shoulder surgery in May 2018 and ended his Bundesliga with 12 appearances with no goals.

During the summer of 2018, Osimhen went for loan trail with Belgian clubs Zulte Waregem and Club Brugge. However, he was not taken by either of the club on loan due to malaria, that affected his physical condition during the trial.

In March 2019, Osimhen was released to play for the Under -23 who were two goals down against Libyans. Osimhen scores three goals against Libya in Asaba.

In July 2019, Osimhen was signed by League 1 Lille OSC. Osimhen scores his first goal in League 1 during his first appearance against Nantes in August 11, 2019 and was subsequently named League 1 played of the month in September.

Osimhen was listed in 25 man squad for the African Cup of Nations by the Super Eagles coach Gernot Rohr.

In August 2019, Osimhen was invited by Rohr for the Super Eagles friendly match against Ukraine and agains Brazil in October 2019.

Osimhen finished the season with 13 goals in 25 league games as their top scorer.

On 31 July, 2020, Italian football club Napoli beat Inter Milan, Liverpool and Manchester United to sign Osimhen in a €50million deal. Osimhen transfer to Napoli made him the most expensive footballer in Nigeria and one of the most expensive in Africa.

Due to an extraordinary performance by Osimhen since his career, he has won series of award which includes the 2015 Under-17 World Cup. Others include

Victor Osimhen is estimated the worth €50 million