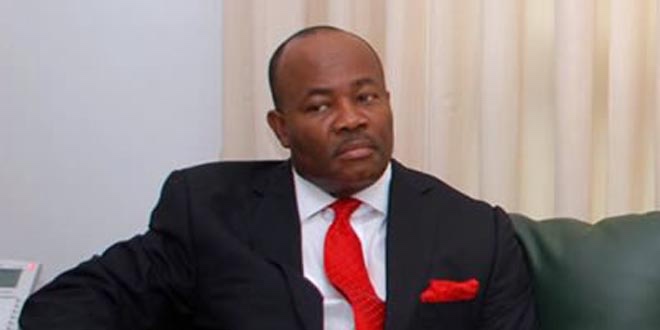 Godswill Obot Akpabio was born on 9th December, 1962 in Ukana, Ikot Ntuen, Essien Udim, Akwa Ibom to the family of Chief Obot Akpabio and Madam Lucy Obot Akpabio. Akpabio is a Nigerian Lawyer, politician, lawmaker and the third governor of Akwa Ibom State. He is the Minister for Niger Delta under President Buhari.

Akpabio obtained a degree in law from the University of Calabar (UNICAL) Cross River State.

Upon graduation from school, Akpabio was employed to work as a teacher and then as an associate of Paul Usoro and Co. briefly. He was later employed to work with a wireless telecommunications company, EMIS Telecom limited in Lagos.

By 2002, Akpabio was already a Managing Director/Chief Executive Officer of EMIS Telecom. While working with EMIS, Akpabio was National Publicity Secretary of the Association of Telecommunication Companies in Nigeria, (ATCOM).

In 2006, Akpabio picked nomination form to run for the office Akwa Ibom state Governor under the Peoples Democratic Party (PDP). He defeated 57 other aspirants to emerge the party flag bearer.

In 2007, Akpabio was elected as the governor of Akwa Ibom State and later for a second term in office in 2011.

During his second term as governor, Akpabio was elected the chairman of the PDP Governors Forum.

In 2014, Akpabio picked nomination form to run for the Senate seat to represent Akwa Ibom North West Senatorial District under the PDP. He defeated Chief Inibehe Okorie of the All Progressive Congress (APC) in the 2015, general election and was elected to the senate.

In July 2015, Akpabio was appointed the Senate Minority leader by the Senate president Bukola Saraki.

In 2018, Akpabio defected to All Progressive Congress (APC) and subsequently resigned as the Minority Leader of the Senate.

Akpabio picked nomination form to run for a second term in office under the platform of the All Progressive Congress (APC). He won the party primaries but lost in the 2019 gubernatorial elections to Chris Ekpenyong of the Peoples Democratic Party (PDP).

In August 2019, President Buhari appointed Akpabio as the Minister for Niger Delta.

Barr. Leo Ekpenyong, accused Akpabio of diverting N100billion during his term as Akwa Ibom State Governor. The EFCC launched an investigation but however the suit was not filed. The lawyer was later arraigned by the police for defamation of character.

In July 2020, Joy Nunieh alleged that Akpabio ordered the blow up of pipelines in the Niger Delta region as well as his involvement in misappropriation of billions of Naira in NDDC.

Nunieh in an interview accused Akpabio of harassing her and attempting to coarse her into taking an oat, which she declined.

Akpabio reacting to the allegations denied

Akpabio is married to Ekaette Unoma Akpabio, together they have four daughters and a son. He is a Catholic by faith.