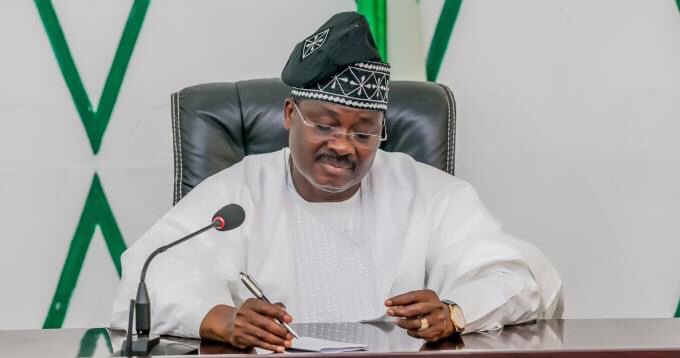 Isiaku Abiola Ajimobi was a Nigerian politician, Senator and former Governor of Oyo State. He was the deputy National Chairman (South-South) of the All Progressive Congress. Ajimobi was born on December 16, 1949 in Oja’ba, Ibadan, Oyo State, Nigeria. His father Pa. Ajimobi was a member of the House of Assembly in the Old Western region and his uncle was a former minister for works and transport.

He proceeded to Lagelu Grammar School where he obtained his Secondary School Certificate. During his secondary school Ajimobi was active in athletics participating in table tennis, and football.

Ajimobi proceeded to study Business Administration and Finance at the State University of New York, in Buffalo, New York.

He obtained an MBA in Operations Research and Marketing at Governors State University, University Park, Illinois.

In 2001, Ajimobi worked as Managing Director/Chief Executive Officer at the National Oil and Chemical Marketing Company

Ajimobi was elected a Nigerian Senator in 2003 to represent Oyo south senatorial zone. He served as the Deputy Minority leader of the Senate during his tenure in the senate.

In 2007, Ajimobi contested for the office of the Oyo State Governor under the platform of the All Nigerian Peoples Party (ANPP) but lost to the Christopher Alao-Akala of the Peoples Democratic Party (PDP)

In 2011, he contested form and won the office of the Oyo State Governor under the platform of the Action Congress of Nigeria (ACN).

In 2015, Ajimobi was elected for a second term in office under the platform of the All Progressive Congress (APC).

In 2018, Ajimobi picked nomination form to represent Oyo South in the Nigerian senate under the platform of the All Progressive Congress (APC). He won the APC primaries but lost in the 2019 gubernatorial elections to Kola Balogun of the Peoples Democratic Party (PDP)

Gaidom in a statement through his counsel said his declaration is in compliance with the judgement of Justice S.U. Bature in suit no FCT/HC/M/6447/2020 dated March 16, 2020, which ordered the suspension of Adams Oshiomhole and ordered that “I, Chief Hon Victor Giadom should act as National Chairman of our great party.”

In June 2020, Ajimobi tested positive to the novel Corona virus and was transferred to NCDC isolation center in Lagos State where he was treated for over 14 days.

Ajimobi was reported to have had complications due to Corona Virus and went into coma.

On 18th June 2020, Ajimobi was rumored to have died of Corona Virus complication. However, Bolaji Tunji, am media aide to the former governor debunked rumors of his death in a social media post.

However, on 25th June 2020, Ajimobi died of complications due to Covid-19 pandemic at First Cardiology Specialist Hospital, Lagos at the age of 70.