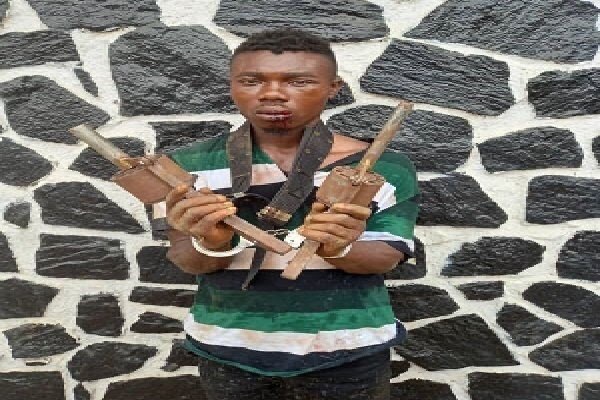 Segun Agodo is a dreaded Nigerian serial killer and cultist. He has been responsible for series of crimes in Ikorodu and some part of a Lagos metropolis. He is also accused of killing two policemen in Ikorodu, Lagos State.

Segun Agodo is a senior member of the Eye Confraternity.

During his arrest, two locally-made revolver pistols, each loaded with seven and 14 rounds of cartridges, one axe, some cutlasses and assorted charms.

A statement by the Lagos State Police Command read

“Agodo, a senior member of Eye Confraternity, had been on the run for a while since the police declared him wanted for his atrocities in Ikorodu.

“But he was sighted in Ikorodu today, April 4, 2021, while the DPO Sagamu Road Division and his operatives were on surveillance patrol around Ikorodu.

“The Commissioner of Police, Hakeem Odumosu, has directed that the suspects be transferred to the State Criminal Investigation Department (SCID) for proper investigation and possible prosecution.

“The suspect, who has been fingered in many murder cases, including alleged killing of a policeman in Ikorodu, was arrested in possession of two locally-made revolver pistols, each loaded with seven and 14 rounds of cartridges, one axe, some cutlasses and assorted charms.”