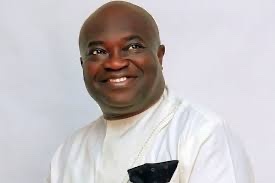 Okezie Victor Ikpeazu is a Nigerian lecturer, politician and the current governor of Abia State. Ikpeazu was born on October 19th, 1964 to the family of Pa Ishmael and Deaconess Bessie Ikpeazu of Umuebere in Umuobiakwa village, Isialaukwu, Mbato Autonomous Community in Obingwa Local Government Area of Abia State.

In 1980, Ikpeazu gained admission to study clinical biochemistry at the University of Maiduguri at the age of 16. He obtained his B.Sc certificate in 1984.

Ikpeazu went for his National Youth Service Corp at the Rivers State University of Science and Technology, Port Harcourt. In 1990, Ikpeazu obtained a Masters Degree in Biochemical Toxicology from the University of Maiduguri.

In 1994, Ikpeazu obtained a Doctorate Degree in Biochemical Pharmacology from the University of Calabar.

Dr Ikpeazu started his career as a lecturer at the University of Maiduguri as a part time lecturer in the department of Science and Laboratory Technology from 1986-1987. He proceeded to lecture at the Calabar Polytechnic from 1990-1992

Between 1994 and 1996, Ikpeazu was an administrative manager at Cash Bond Investment and Credit Ltd.

In 1998, Ikpeazu was the acting Head of Department in the department of Applied Biochemistry at the Enugu State University of Science and Technology (ESUT) till 2001.

Ikpeazu was an adjunct lecturer in the department of Biochemistry, Ebonyi State University, College of Medical Science from 2000-2002.

Dr. Ikpeazu was appointed the first transmission committee chairman of Obingwa local government in 2002 by the then governor of Abia state Orji Uzor Kalu. A position he held till 2003.

In 2007, he was appointed General Manager of Abia State Passenger Integrated Manifest Scheme (ASPIMS), a position he held till 2009. He was reappointed for the same position in 2011

In 2010, Ikpeazu was appointed Chairman of the Governing Council of Abia State College of Health Technology

In 2013, he was appointed as the 1st Deputy General Manager of Abia State Environmental Protection Agency till 2014.

On 31st December, 2015 Akpeazu was sacked by a Court of Appeal sitting in Owerri and was ordered to vacate office. Alex Ottih was declared winner of the gubernatorial election by the presiding judge Justice Okon Abang of the Federal High Court. The ruling was however dismissed by a Federal High Court in Owerri.

Okezie Ikpeazu is married to Nkechi Ikpeazu. They have four children together. He is a member of the Seventh Day Adventist