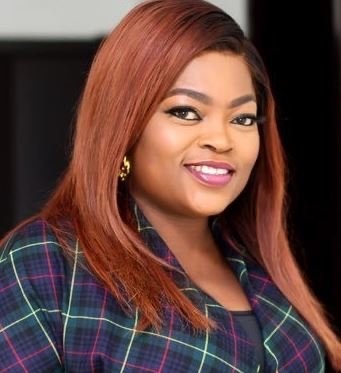 OluFunke Akindele AyoTunde popularly known as Jenifa is a Nigerian actress, comedian and movie producer. She is popular for her comedy TV series Jenifa’s Diary. Funke Akindele was born on 24th August, 1977 in Ikorodu, Lagos State. She was the second of three children. Her mother was a medical doctor while her father was a retired principal.

Funke Akindele attended her primary education at Grace Children Schools, Gbagada she proceeded to Lagos State Model College, Igbo-kuta secondary education whet she obtained her WASC. She proceeded to study Mass Communication at the Ogun State Polytechnic, now Moshood Abiola Polytechnic and a Law degree from  the University of Lagos.

Funke Akindele started her career as an actress in 1998 when she featured as Bisi in United Nations Population Fund (UNFPA)-sponsored sitcom “I Need to Know”. The TV series lasted till 2002.

In 2008, Funke Akindele produced Jenifa’s diary where she played the role of the lead character Jenifa. Jenifa’s Diary brought her rot the limelight in the movie industry. Funke Akindele won an Africa Movie Academy Award for Best Actress in a Leading Role in 2009.

In 2009, Funke Akindele featured in a Yoruba movie “Oguni Aiku” and “Apaadi”. She played the lead role in both movies. She was nominated as Best Actress in a Leading Role in the 2010 Best Nollywood Awards.

In 2010, Funke Akindele featured as Maami in Tunde Kelani movie “Maami”. She also produced a comedy drama “The Return of Jenifa” where she played the role of Jenifa.

In 2018, There were reports that Funke Akindele will be featured in Marvel’s infinity War as the guard Dora Milaje. IMDb was cited as the source. However, her name was replaced with that of fellow Nigerian actress Genevieve Nnaji.

Funke Akindele was featured in “Mums At War” alongside Michelle Dede. She also featured in AY “Trip to Jamaica”

In 2019, Funke Akindele launched a new movie series Aiyetoro Town, a spinoff from her popular TV series, ‘Jenifa’s Diary’. She made her directorial debut in 2019 political drama film Your Excellency.

Funke Akindele is the CEO of Scene One Film Production.

In 2012, She won the Best Actress in the 2012 Nigeria Entertainment Awards, Zulu African Film Academy Awards and 2012 Nollywood Movies Awards for her role in Troj, The Return of Jenifa and Emi Abata respectively.

In 2013, Funke Akindele won the Best Actress(indigenous) in the 2013 Nollywood Movies Awards for her role in Tv drama Miami.

In 2016, Funke Akindele won the Best Actress (Comedy) in the 2016 Africa Magic Viewers Choice Awards and Naija FM Awards. She also won the Naija FM Awards Sitcom of the year.

She won the Best Collaboration of the Year and the Best Actress of the year in the 2016 Ghana Movies Award and Africa Entertainment Legend Awards respectively.

In 2017, Funke Akindele won the Best Actress in a Comedy and her movie Jenifa’s Diary won the Best TV series in the 2017 Africa Magic Viewers Choice Awards

In 2020, she won the Best Supporting Actor in a Movie or TV Series in the 2020 Africa Magic Viewers’ Choice Awards.

In May 2012, Funke Akindele married Adeola Kehinde Oloyede but divorced in 2013 due to irreconcilable differences. She remarried Nigerian rapper JJC Skillz in London in May 2016 and together they have a set of twins.

In April 2020, Funke Akindele was arrested for throwing a birthday party for her husband JJC skills during a lockdown imposed by the government to tackle Corona Virus outbreak in Nigeria.

Funke Akindele alongside her husband was charged to court for violating the Lagos State Social Distancing act.

The duo were sentenced to 14days community service excluding weekends for 3hours daily. They were also told to pay N100,000 each.