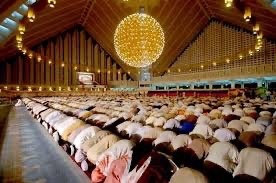 Taraweeh prayer (also Tarawih prayer) is a special prayer performed by Muslims during the month of Ramadan after every evening last daily prayer. Taraweeh is an Arabic word which means “to rest and relax”.

Throughout the month of Ramadan, Muslims line up every evening to observe a number of optional rakats of prayers and listen to and reflect on the recitation of the Quran.

Taraweeh prayer started during the last year of Prophet Mohammed’s life. Prophet Mohammed came out one night and prayed Taraweeh. People joined him to say the prayer in subsequent nights.

On the fourth night, the mosque was packed with people awaiting to say the Taraweeh with Prophet Mohammed. However, Prophet Mohammed did not show up for the prayer but rather prayed at home.

Prophet Mohammed after fajr told the congregation that he feared the prayer will be made compulsory for Muslims.

Prophet Mohammed said: “Nothing prevented me from coming out to you except the fact that I feared that it would be made obligatory for you.” (Muslim)

From Caliph Abu Bakr to the beginning of Caliph Omar’s time, the Taraweeh was said either individually or in small groups. Prophet Mohammed led the Taraweeh prayer in 8 rakats and was subsequently increased to 20 rakats.

In 717-720AD, Caliph Omar bin Abdulaziz prayed the Taraweeh for 36 rakats for the people of Medina.

There are rewards for whoever prayed the Taraweeh